How to Organize Your Business & Systems: 5 Principles for Clarity & Success 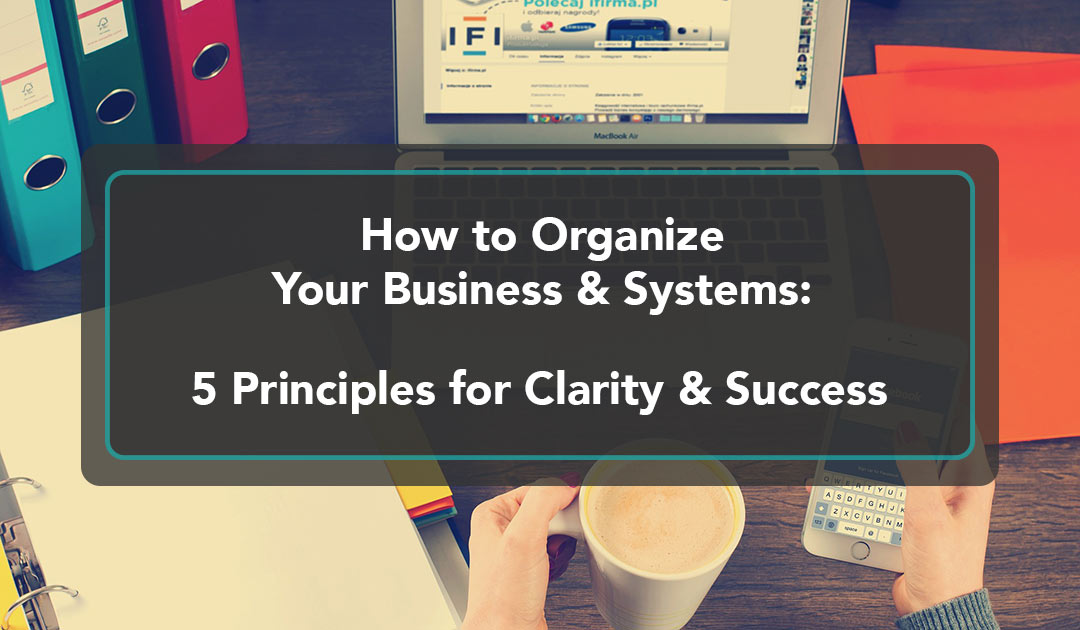 Popular advice tells you to “organize your business in whatever way works for your brain.”

Organizing your business in a way that makes sense to you works fine unless and until any other human being becomes an integral part of your business.

Because at that point, it's not just your brain that matters. Now it's two brains. And no matter how much you train that other brain, it's never going to think about things exactly like yours.

The “Makes Sense To Your Brain” organization system will become a source of confusion, frustration, persistent questions and re-training, lost information, and ultimately, lost time (which equals lost money).

Do not organize your business “for your brain” or for your own individual quirks.

Ideally, someone joining your team should be able to come in to your business almost cold and be able to relatively quickly orient themselves, understand your system, and find what they're looking for or accomplish the task they've been given — no further instruction necessary. Your organization and systems should be that clear.

Because here's a fact:
You can't make up for poor systems & organization with extra training. You'll always wind up losing time & money. click to tweet it

So if “whatever makes sense to your brain” isn't the right way to go (and it's not), what's better?

Keep the following guidelines in mind, and they'll help ensure that you're organizing and setting things up in a way that's sustainable and usable by you and team members, and in a growable and adaptable way.

Principle 2: The More Obvious, The Better

The more you have to explain the system, documentation, name, or way something is set up / organized to someone else… the more it's probably in need of being simplified, streamlined, and/or clarified.

Everything should be as clear and obvious two years from now as it is today.

Simplify wherever possible, but only as much as clarity allows.

Principle 5: Everyone and No One are Temporary

Decisions about your organization, documentation, or systems should not be based on the “everyone” and “no one” of your business because those are inherently temporary.

Following these principles gives you a foundation for setting up a clear, simple, streamlined document, ops manual, filing system, or other organization system that's optimally usable (so you can bring in the team support you need without expecting or requiring that they all learn to “think” just like you do), sustainable, and readily scalable as your business evolves.

And if you need help getting your organization organized (wink, wink), let's talk. I can help.

May “Bracke's General Principles for Organizing Businesses and Systems” serve you and your business well!