It Is What It Is: Turn This Phrase from a Conversation Stopper to an Action Starter 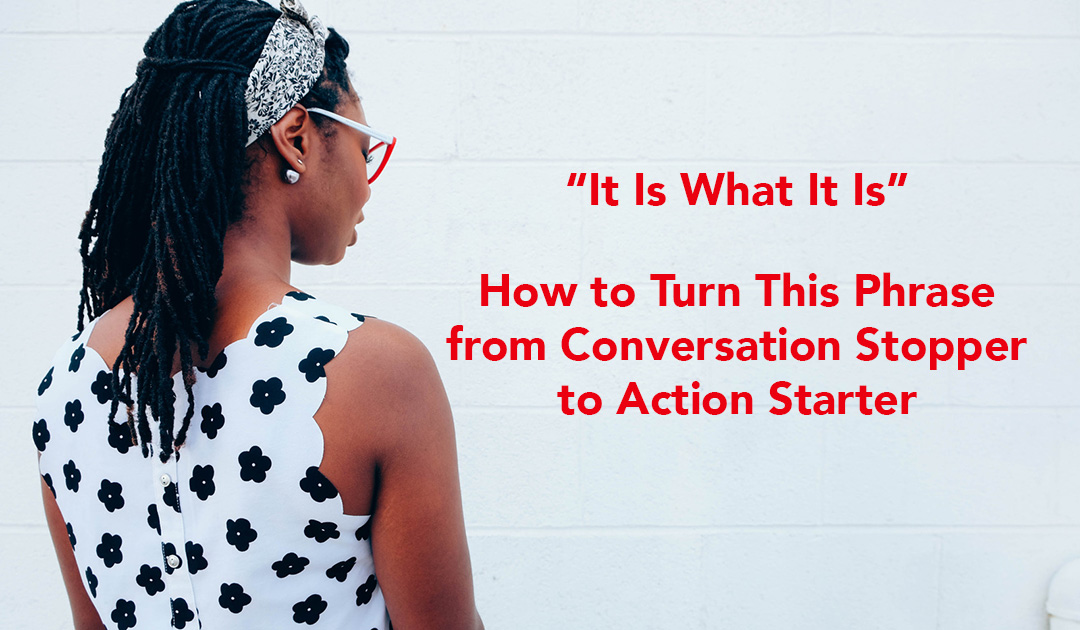 Most people I know hate the phrase, “It is what it is.”

And I get where the dislike comes from. It's a often accompanied with a shrug and used to express some kind of finality.

It's often shorthand for, “Hey, it's not my problem,” or “Don't look at me, I'm not the one responsible for this,” or “What's the point of discussing this situation when there's clearly nothing I can do about it.”

That makes it a frustrating response. It becomes the equivalent of shutting the door in someone's face.

So yeah — it's easy to use, and easy to dislike. No wonder.

I love the phrase, “It is what it is”… but I use it differently.

Before you can do anything about any situation, personal or business, you have to know three things:

No matter how huge your endeavor or vision might be, you start by getting your bearings on those three pieces of information, and determining what step to take from there.

This is where the phrase, “It is what it is” becomes so useful.

It's a way of discarding all the versions of the plan that would be nice, but don't actually exist. (At least, not yet.)

It's a way of detaching from the things that you really wish were within your control — but aren't. (At least, not yet.)

It's a way of separating yourself from the way you believe things should be right now, and getting clear about the way things actually are right now.

Used this way, “It is what it is” is a powerful phrase for giving you the ability to get oriented, get clear, and be able to begin taking useful action.

You want to improve your revenue, and despite having tried a lot of different tactics, nothing's really worked.

It boils down to seeing “It is what it is” as a beginning point, rather than an end.

This is also how I've found it most effective to work with people who use the phrase in the “frustrating use” way.

They may be trying to slam the door of the conversation. Sometimes they are.

More often, they honestly feel like there's nothing else they can do — or that anyone can do — so it's pointless to talk about the subject.

Either way, when someone uses it in the “frustrating use” way, you've got a choice: either be frustrated, or work past it.

You're welcome to do either. There are certainly times you'll wind up doing both (wink). In the interest of encouraging you to do the latter, though, I assure you it's easier that you might think.

First, realize that their statement, “It is what it is,” is true.

It may be factually true for both of you — such as when someone is observing how certain tactics haven't panned out as planned, as in the second example above.

Or you may not see it as factually true at all — but you have to realize that the other person does.

If you try to argue your point or negate theirs, you're probably going to wind up with both of you frustrated, angry, and at an impasse.

But here's the good news: it doesn't matter whether you agree.

It doesn't even matter if it's “factually true.”

It only matters if you're willing to say, “Okay.”

In other words, assuming that what the other person said is true, and that the situation they've described “is what it is”… what can happen next? Instead of taking their statement as the end of the line, use it as the beginning of a new line of exploration.

Possible ways of moving beyond “It is what it is”:

I love a good reality check, and used well, that's the essence of “It is what it is.”

Where are you right now?
You're there. That's where you are. You might want to be someplace else — someplace farther ahead, someplace bigger, or better, or richer, or with a bigger team, or with a more consistent second product line — but you're here. It is what it is. So what next?

What have you been trying over and over again that's just not working?
I know, it's supposed to work. You were promised that it would work. It worked for the person who recommended it to you, and it worked for all those other people who swear by it — and it's totally unfair that it's not working for you. But it's not. It is what it is. So what next?

What have you pushed aside as too big, too much, too bold, too far?
Maybe it is. Maybe you're absolutely right. Whatever it is probably is big, and a lot, and bold, and far — for you, for your business, for your team, for all of the above. It is what it is. But are there any smaller steps within your control that you can take? In fact, what is the absolute smallest step in that direction that you could take? That tiny step is probably not too big, not too much, not very bold, and very close. So the overall thing you pushed aside? Sure, it is what it is. But… so what next?

(See how this works?)

You get the picture: No more slammed doors. Just reality checks, or new lines of exploration.

You just might even find yourself loving the phrase “It is what it is” as much as I do.

(Or at least not actively loathing it.)

Either way, it's my hope that you're able to turn it into a constructive part of your personal and business conversations, instead of feeling like it's a slammed door.

May it serve you and your business well!