Getting Wired In: How to Get Focused and Get Your Work Done Effectively 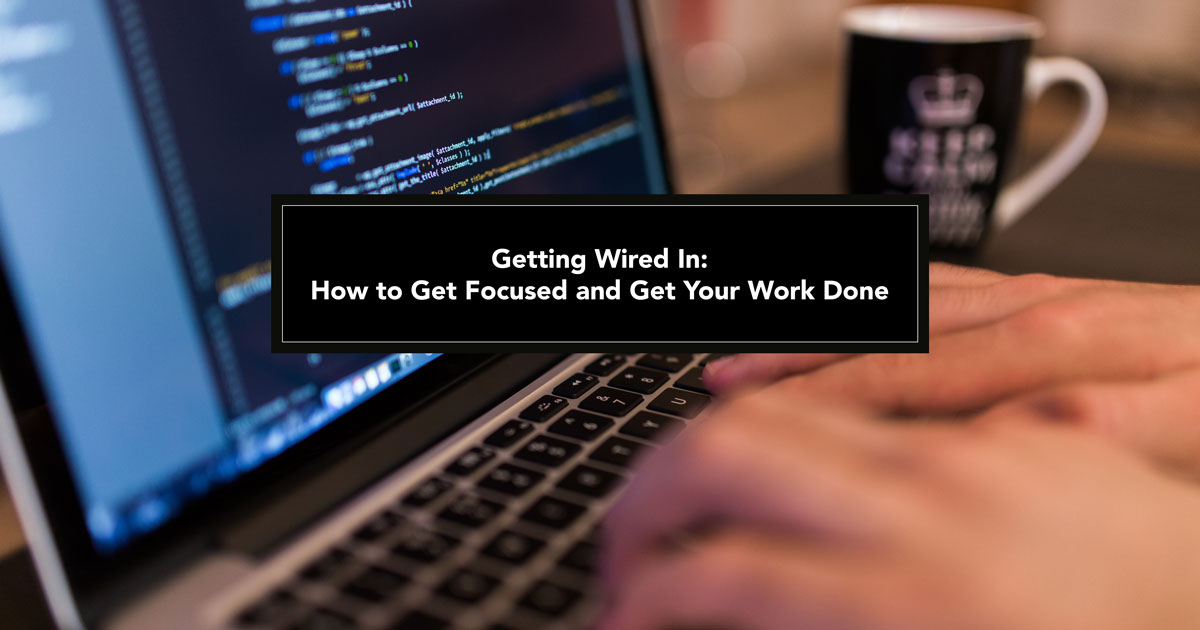 There are a couple of scenes in The Social Network (the movie about Facebook's creation) where someone describes one of the movie characters as being “wired in.” The character is shown typing code, headphones on, a bottle of highly-caffeinated soda nearby, and totally oblivious to the rest of the world. The character is laser-focused, completely engaged with his work. He's “wired in.”

I love being wired in.

It's when I do my best work. My version only occasionally involves typing code, and rarely includes soda. But when I manage to get wired in, my work is more efficient, my efforts are more effective, my writing comes through more freely, and I just simply get more done.

The trick is figuring out how to get wired in… because if you wait for it to “just happen,” it probably won't.

We've all had times when we've sort of spontaneously gotten “in the zone” and been really focused and efficient.

But we've all had more times when we've spontaneously frittered away our time on social media or websurfing or being “busy” while not being effective.

If we want to be consistently effective with our time and energy, we can't leave it up to chance.

We have to design a way to guide ourselves to that wired in state. The specific details of how you do that will differ from person to person, but here's the basic framework for how to get wired in, get focused, and get your work done.

Before I get wired in, I make sure my dogs' water bowls are filled and that they've been outside recently, so that they're not likely to interrupt me while I'm working.

Before getting down to work, check in with yourself: are you hungry? (If so, grab a snack.) Are you chilly? (If so, throw on a hoodie.) Do you have anything else pressing on your mind? (If so, jot down those forget-me-nots in a notebook to deal with later.)

By taking care of the “usual suspects” of interruptions ahead of time, you make it easier to succeed in getting wired in.

2. Establish a pattern that tells your brain it's time to focus.

The first few times you make a concerted effort to wire in and focus, your brain might resist, especially if you've established a pattern of getting distracted whenever you sit down to work.

But you can re-write your pattern.

My example: When it's time to get wired in, I make myself a cup of hot tea, I light a candle, and I light a stick of incense.

Do not sit down to focus, and only then look at your to-do list and decide what to tackle.

Adding decision-making to the process makes it harder to get wired in, because you'll wind up with an inner dialogue: “I could do Task A, which would be quick… but I should do Task B because that's really stressing me out and I'd like to just be done with it… although Task C could probably get done pretty easily and then I could do Task B next…”

By the time you settle on what you're doing, you've used up a chunk of your wired-in time.

Make the decision of what you're going to work on before you sit down to get wired in.

Brainstorm your to-do list, then review it and pick out between 1 and 3 things you want to focus on. Then when you sit down to get wired in, there is no inner dialogue about the tasks. The decision has been made. You have clear direction.

In order to get wired in to your work, you may want to wire out of email and social media.

You can use an app like Self Control or Focus to block distracting websites during your wired in time.

Put your phone in Airplane Mode if you're able — it's amazing how many distractions our phones add that we don't even realize until they're gone. If airplane mode isn't an option, at least turn off as many of the notifications as you can.

Maybe you work best when there's total silence. If that's you, do your best to create that. Turn off the television or leave the room where others are watching it, close your office door, use earplugs, or use noise-canceling headphones with low “white noise” playing to help block ambient sounds.

If you prefer specific types of music, Pandora, Spotify and iTunes can be your best friend for quickly accessing interruption-free tunes to support your focus. There's even Focus@Will, which says it uses scientific data to select music that will help boost your concentration.

Whatever your preference, select it, and make setting it up or turning it on a part of your pattern. That way you won't be using up precious time deciding what background to use every day, and your brain will begin to associate it as part of your “get focused” pattern.

Once you're wired in, it's tempting to just push yourself to keep working until you're totally spent.

Pushing yourself until you can push no more is a recipe for quickly burning out. It's sporadic, not consistent. That's not what we're after.

Setting timers is key here: once you're in the zone, it's all too easy to completely lose track of time! I use a simple timer app on my phone (Due) to ensure I take 15-20 minute breaks at least once every two hours. That's a good pace for me. Others love The Pomodoro Technique.

(I also have the built-in timers of my Canine Vice-Presidents, who ensure I take breaks every so often to take them outside. #Helpful)

7. Do not kick your own butt when you can't get wired in.

You know how when you have insomnia, the worst thing you can do is lay there in bed thinking, “I should be sleeping right now. I'm going to be exhausted tomorrow if I don't go to sleep. Why can't I sleep? I should be asleep! SLEEP, dammit, sleep!”

When you can't get wired in, the worst thing you can do is berate yourself about not being wired it.

Despite what corporate schedules would have us believe, we are not always “on” day after day, week after week. Some days we're scattered and unfocused, and no amount of hot tea and Spotify playlists will change that.

Unsurprisingly, this will probably lead to you resisting sitting down and focusing.

Don't go down that path.

You will have days when you can't get wired in. That's okay.

And then get wired in again tomorrow, refreshed and reset.