This Is What I Believe: 20 Principles I Stand For 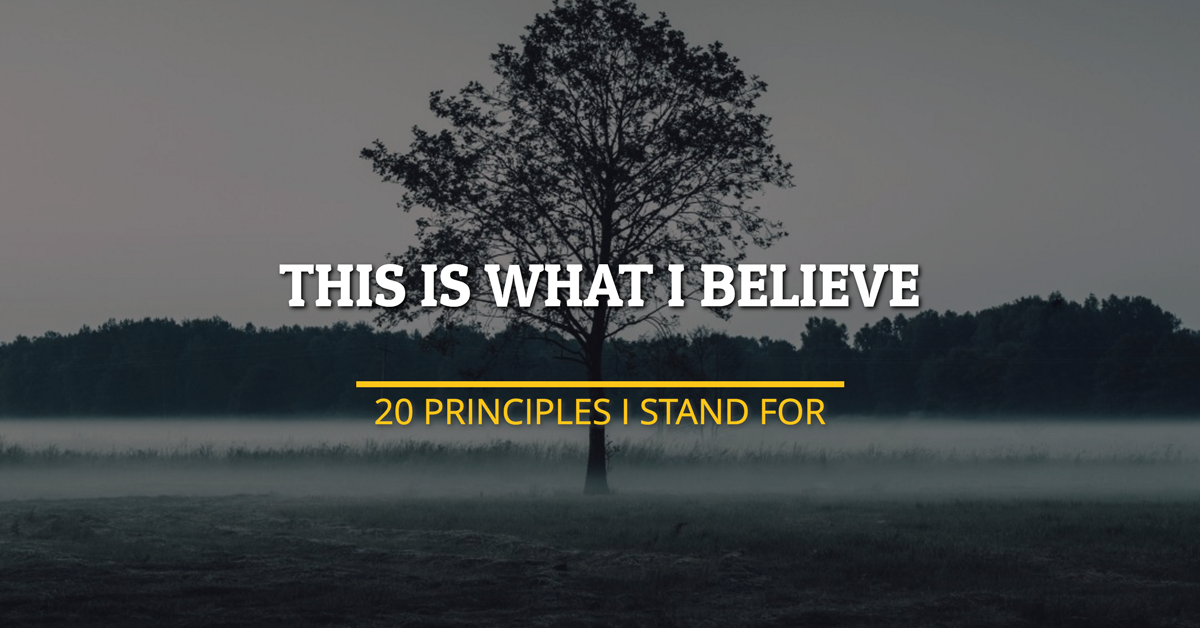 To the extent that you are able, protect yourself from harm and care for yourself.

To the extent that you are able, do not cause harm to someone else.

To the extent that you are able, do not allow harm to come to someone else.

You are worthy of respect, dignity, and compassion.

You have a right to be free from abuse, oppression, degradation, and mistreatment in all forms.

The principles of Do No Harm and Take No Shit will sometimes appear to be at odds with one another. You will need to discern when they are, and how best to respond. Remember: there is a reason the first tenet of all others is to protect and care for yourself. Failing that, nothing else matters.

What humans do doesn't always make sense, but what humans do rarely happens without reason. If something looks random, you're probably missing part of the context. Before you make final judgments, seek out what you're missing.

Context can be intentionally removed to manipulate your perception.

Done on stage by an illusionist, it becomes magic. Done on a webinar by a marketing personality, it's becomes a no-fail formula for a six-figure business. Done on a sales page by a skilled copywriter, it becomes a countdown to a one-time only offer that will reveal how you too can use Facebook ads to get thousands of new leads for just pennies on the dollar.

If you could see the full context, the illusionist's magic would be an elaborately pre-staged sleight of hand.

The context behind the webinar's sales pitch would reveal that the touted six-figure business runs on razor-thin margins netting just a few hundred dollars in profit.

The sales page's context would show that the advertising structure they're promoting is already out of date, has gotten many of its customers banned for violating Facebook's terms of service, and is utterly useless for the vast majority of businesses because they lack the back-end infrastructure necessary to capitalize on it even if the ads succeeded.

There is no magic secret, no fail-proof formula, no surefire way to succeed. There is lack of context presented strategically to persuade you to buy shit.

Look for the missing context.
Notice what parts are missing.
Notice who benefits from those parts being removed.
Make choices accordingly.

Making the personal connections clear and explicit is part of Being Real. You are putting to the forefront what's already happening.

But MAKING something personal is not the same as TAKING it personally.

Taking It Personally pulls It in as yours to own. And It might be. We all need to pick up our shit when we reach the point of being able to see it for what it is, handle it, and stop asking others to shoulder it on our behalf.

They will be quick to hand it to you. It's up to you to refuse it. Remember: part of doing no harm is protecting and caring for yourself.

Discerning what is yours to own, work through, and do with, and what it someone else's, is not a matter of semantics: it is a matter of survival.

Philanthropy after the fact does not absolve or forgive the means by which the money was made.

“Once my family and I are taken care of, then I'll do great things for these causes…” does not absolve or forgive the things you do along the way.

Big names often shine bright lights on their charitable giving as a way of deflecting the light from the dark corners of their conscience.

“I don't like to get political” is never uttered by someone whose life is regularly upheaved and dismissed by systemic poverty, violence, abuse, exclusion, and degradation — because they don't have a choice.

“I don't like to get political,” or “I'm tired of talking about all this crap,” or “I just try to talk about more positive stuff” is uttered by those who have the ability to tune in and tune out at will, by choice, at their convenience.

Tuning out is part of the systemic dismissal of those who cannot make that same choice.

Neutrality isn't neutral. Choosing to “stay out of it” supports the ongoing oppression of those who cannot make that choice.

9. FEAR AS LEVERAGE IS ABUSE

Hate masquerades as reasonable fear.
“I am afraid of being hurt by a terrorist” sounds reasonable and acceptable in a way that “I hate brown men who wear turbans” does not.
Yet the person claiming the first statement cannot rationally distinguish it from the second one, other than she knows the second one sounds wrong.

To use fear as leverage is abusive, to the person you're making afraid, and to any subject of the fear.

Because Money Absolves Nothing.

When it comes to ethics, if you catch yourself feeling defensive about something, you're probably trying to find a loophole.

11. OWN YOUR CHOICES — AND THEIR CONSEQUENCES

Notice how much of your life is within your control (and how much isn't).

Own what flows from your choices. You get to choose to scorch your earth, but you cannot absolve yourself of all consequences of having made that decision. Are you desolate, or are you free? Liberated or lost? Empowered or entangled? (All?)

What's true for someone else may not be true for you. Own YOUR choices, and own YOUR consequences.

As in #5: Discerning what is yours to own, work through, and do with, and what it someone else's, is not a matter of semantics: it is a matter of survival.

12. WHAT YOU CAN DO MATTERS

What you can do matters, however incremental or monumental that might be.
For your cause.
For your family.
For your art.
For your home.
For your business.
For yourself.
Whatever you can do:
It Counts.
It Matters.

If you don't know why you're doing something, don't. Flailing wastes precious time and energy.

Spend fewer fucks on the bullshit that doesn't matter.

Spend your fucks on the things you really care about.

If you're unclear on the difference, make it a priority to figure it out.

It cannot, however, simply vanish.

Work does not vanish just because YOU do not see it.

Work does not vanish just because YOU do not do it.

Work does not vanish just because YOU do not hear about it.

Work does not vanish just because the person doing it makes it appear easy and/or fun and/or fast. It might be all three. It probably isn't.

The notion of setting goals around “doing less work” or “working fewer hours” is a poisonous notion, because it depends on the belief that Work Can Vanish. And because it cannot, the notion always fails: the work has to go somewhere, to someone, who will then never be able to meet that goal.

Therefore, at the very least, it depends on your belief that work should be able to vanish for SOME people, but not others. That there are people who deserve to make work vanish at the expense of those who do not deserve it. This is the premise of the 4 Hour Work Week and all business models that stem from it, including all outsourcing to unsustainably low-priced assistants.

Maybe you do believe that.

And in so believing, you believe in perpetuating the unsustainability of the remote worker market for your personal comfort. See #11: Own Your Choices And Their Consequences.

You cannot challenge your own assumptions by yourself.

Surround yourself with people who help you intelligently challenge your assumptions, and act with integrity as you do so.

Banish all “Yes Men” from your presence. Yes Men thrive on assumptions and fear challenges. Yes Men will watch you stick your head up your own ass, and will sit quietly by as you do so.

Laws, by the way, are Rules.

Human Resource policies, by the way, are Rules.

Know The Context behind the rules you buy into.
Own Your Choices around what you abide by.
Own Your Consequences when you choose not to.
Challenge Your Assumptions about obedience and righteousness, dominance and the perception of fairness.

Niceness is at loggerheads with the ability to Be Real.

Niceness demands that even if you know what you mean to say, you not say it, because it might not be “nice enough” (according to the Rules — the social norms, the policies, etc. — which, as we know, reflect the existing power structure).

And even if you DO say it, you certainly shouldn't DO what you said, because doing it is even less nice than saying it.

The best niceness is to sit quietly. Hands in your lap. Be seen and not heard. Politely, and according to the Rules which reflect the dominant power structure.

Niceness inhibits progress precisely because what is “nice” is proscribed by the existing power structure, and progress pushes beyond it.

Can you be kind and make progress? Yes. Generous? Yes. Compassionate, personable, warm? Yes, yes, yes. These are not the same thing as “nice.”

Niceness stays within the bounds of what already IS deemed as acceptable. Progress demands more.

19. RESISTANCE TO PROGRESS SPOTLIGHTS WHOSE POWER IS THREATENED

Those who show up to fight against progress tell you a lot about what dominant group is threatened by that progress.

Watch who shows up to argue in favor of the status quo.

Watch who shows up to shame those who dare ask for equality.

Watch who uses fear as leverage to persuade others that treating This Human with the same respect and dignity as That Human is bad because [scary outcome here].

She also dances, tells bawdy jokes, bakes brownies you'd stand in line for, and Karaokes on a regular basis. (As if you wouldn't be singing Purple Rain duets with Prince on the regular if you were The Almighty. Please.)

There is sacredness to the disproportionate ratio of puppies' feet and ears, too big for their bodies, making them flop and cute all over the place.

There is a cosmic purpose for comedians who tell truths in a way that make a room full of strangers laugh like family.

There is divine communion whenever deliciousness is savored, Oh My God you have to TASTE this testified, gospel spread from fork to lips and worshipped on taste buds.

There is a holy union that happens when girlfriends gather themselves up and dance themselves sweaty for no man's purpose but to find liberation in laughter and rhythm.

She knows you can take the challenges of this life seriously while finding respite, nourishment, and delight in its pleasures.