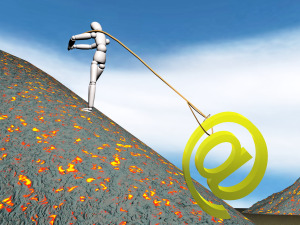 Email, for many of us, has reached a point where it feels burdensome and out of control on more days than not. Some folks are ditching email entirely–an impulse I can't claim is unfamiliar, though that's probably not a realistic possibility for many of us.

I'm not alone. Leo declared independence from email. Gwen described migrating off of email. Havi said her biggest regret about going on email sabbatical was not doing it sooner.

Reaching the “breaking point” in your relationship with your email inbox is, for a growing number of digital denziens, a rite of passage. Some, like Leo, leave email behind. Others, like Havi, outsource the email handling. And others, like Gwen, are redefining and restructuring their use of and dependence on email.

1. Email is too reflexive.

It has become, unfortunately, way too easy to hit “compose” or “reply.”

The very instant a query comes to mind, some folks fire off an email, rather than pausing to consider where else they might find the information they're seeking

The “Compose/Reply” buttons have superseded our own impetus to pay attention, and at a certain point, it becomes disrespectful to the person you're emailing. It says, “My time is too important to be bothered reading/checking my info/etc., but your time is far less valuable, so you do it instead.”

A client once received an email from someone asking us to provide them with the phone number for a teleseminar. The number was contained in the email to which they were responding. But they explained, and I quote: “I'm sure the info is here, but it's easier to email you and have you tell me than to read the email! lol”

Checking email once a day addresses this because…

…it builds in a time-delay between the email and the response that helps eliminate the perception that it's faster or easier for the recipient to read/look at/process something than it is for the sender to do so.

If you know that your email won't be received and processed for 12+ hours, it forces you to stop and think, “Do I want to figure this out myself and have the information sooner, or do I want to send the email and wait for the reply?” It's no longer always easier to hit compose than it is to read your own email or make use of your own resources.

2. Email is too stressful & panic-ridden.

For better or worse, email (and voice mail, to some degree) bring out the Big Red Panic Button Pusher in many of us. Because the technology is so instantaneous, we want the response to be just as immediate. And somewhere along the line, we forgot that wanting immediate responses isn't the same thing as needing them.

So when a sender sends an email, and in under 24 hours starts sending follow-up emails asking if the prior emails were received (and if they've been received, when were they received? and where are they in your queue? and how long 'til you do what's asked in the email? and… etc. etc. etc.) it becomes a recipe I like to call “Insanity with a twist of agonized screaming.”

That which can be responded to immediately does not equate to that which should be or needs to be responded to immediately. In our logic brains, most of us know that. In the part of our brains that controls email usage, all we see is the Bright Red Panic Button that starts flashing as soon as we hit “send” and doesn't quiet down until we get a response… at which point we hit “Reply” and then start the whole panic sequence all over again.

Checking email once a day addresses this because…

No matter how available you make myself via email or how fast your average response time is, there will be pressure to be more available and to respond even faster. At some point, it becomes necessary to take control of the expectations and set them yourself, rather than continually trying to meet the expectations others are setting for you.