I don’t want to run a marathon 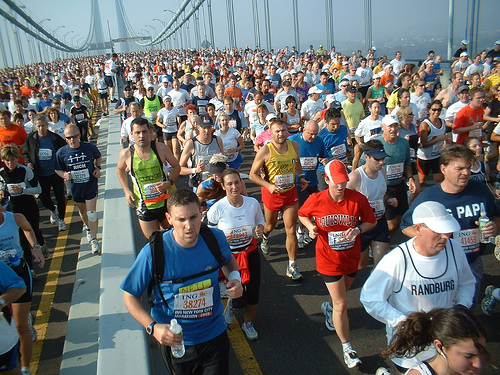 This is a photo of marathon runners who are notably Not Me.

I have a confession: I don't want to run a marathon.

Running a marathon is a pretty common item on peoples' Someday Lists (a.k.a. Goal Lists, Bucket Lists, etc.). It was on mine, too. Until today, when I realized: I don't have the slightest desire to actually run a marathon.

It's not like I only just now lost the desire to run a marathon. I never really had that desire. So why was it on my Someday List?

This realization prompted me to take a closer look at other items on my Someday List. I'd made a common mistake: I filled my Someday List with items generally accepted as excellent goals, things that lots of people include on their lists, experiences that are on the Someday List not because I long for the experience, but because other people deem it a worthwhile goal or put it on their own lists, and I figured I should experience it.

It's no wonder so many items on my Someday List sit stagnant, me never making any strides closer to their accomplishment. I didn't really want them. I didn't have any spark of passion behind them. They were there because I thought they should be, or because I thought other people would applaud my accomplishment if I did them. I allowed other people–or, more precisely, my impression of other people's expectations and preferences–to craft my Someday List.

So I'm revising that list. Any item that doesn't fully and completely resonate with me doesn't deserve a spot on the Someday List. Any item that I hesitate in scratching off solely because I think other people would approve of me if I did it? Gone. Any item whose foundation is Should rather than Passionate Need To Do? Outta here.

Running a marathon is off the list (as is climbing a mountain and transitioning to a 100% raw diet, among others). Maybe through the twists and turns of life's journey I'll still wind up doing those things–I'm not closing myself to possibilities, but they don't currently warrant one of the spots on my Someday List.

As I reflected on my personal Someday List, I realized many of us make the exact same error when we create our business Someday List. We include items like “Publish a book” or “Be the keynote speaker at a big conference” or “Get over 60,000 readers a month on the blog” or “Make six figures a year” because those are things we're told we should want. (And if you really do want those things, then by all means, include them on your Biz Someday List & start making a plan to make them happen.)

But if what you have no desire to actually publish a book, and having 500 active and dedicated readers to your blog would make you happy and fulfill your business needs, and making six figures is neither necessary nor something you passionately care about… then it's time to revise your list. Give the other items the boot and make room for the goals that spark your flame.

But when it comes to our Someday Lists, we can put the full fire of our own passion and abilities toward a list of goals and hopes that comport with no one's definition of success or impressiveness but our own.

It's worth noting that getting clear on your resonant goals, hopes and aspirations makes it that much easier for you to find and click with your right people. And if you've been finding it hard to figure out who your right people are, you might be surprised at how much that has to do with what's lingering on your list of goals that doesn't actually resonate with you. If you're aiming at a target that doesn't really reflect what you want, it's no surprise that you're probably surrounding yourself with people that don't quite reflect your right community.

I don't want to run a marathon, but I do want to speak conversationally fluent German.

I don't want to be fully booked as a Virtual Assistant, but I do want to get fully booked with clients who want me to help them get clarity around their Big Visions and engage with their Right People (a change I recently made to my Business Goal List!).

What about you: What's on your list because you think it should be there? If you scratch the Should off your list, what experience or goal could you make room for that you really want?