Cheesecake Is Such A Scam 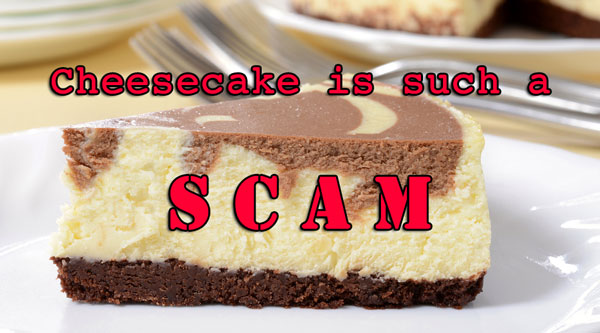 People who don't even like cheesecake, flip out over how good his cheesecakes are.

He makes one in particular — this decadent, rich, sends-your-taste-buds-on-a-psychadelic-trip Ghiradelli chocolate paradise number — that is so good, it can silence an entire room of my family members in the middle of a football game.

Let me assure you, that is no small feat.

He keeps the sacred recipes for these exquisite desserts stored in his head. But Charles is a pretty nice guy, so if you asked him for one of them, he'd probably jot it down for you.

So let's suppose you got inspired, either by the possibility of Ghiradelli decadence or the momentary quietude of a roomful of dessert indulging football fans, and asked my brother for one of his famous cheesecake recipes.

And Charles, nice guy that he is, shared it with you.

You head to the store, acquire all the necessary ingredients, and proceed home to make the masterpiece.

But it doesn't turn out quite right.

You could, at this point, throw your hands in the air and declare, “This recipe DOESN'T WORK!” and abandon it entirely, never to attempt it again.

You could shake your fist angrily in the air and cry out, “Charles! You villain, you charlatan! You have defrauded me with your false promise of cheesecake. Never again will I fall prey to your charade of deliciousness!”

You could even go so far as to decide that cheesecake itself is a total failure — nay, a total sham — and that everyone out there claiming to have successfully made delicious cheesecake is probably lying, cheating, and somehow profiting off cheesecake victims such as yourself.

You would be a little loony, but you could do that.

Or, more reasonably, you could revisit the recipe and double check…

Was the cream cheese at the right temperature when you used it? Was the oven temp set right? Hmmm… you did kind of rush the baking time because you had to get out the door for that appointment, maybe it needed that extra five minutes after all? And yeah, okay, you sort of eyeballed the whipping cream instead of measuring it so that might not have been spot-on… maybe that made a difference…

When it comes to cheesecake, the choice seems common sense. You go back to the recipe. Of course.

You double check things. You tweak a few things, try again, see how it turns out. No biggie.

You don't immediately blame the recipe.

You don't immediately doubt Charles' integrity or suspect he's out to “get” you.

You definitely don't immediately doubt the entire existence of cheesecake itself, or question the integrity of everyone else on the planet who claims to have made delicious cheesecake.

But now let's replace “cheesecake” with… a marketing tactic.

Let's say, instead, that my brother gets some doozy results with email marketing.

And instead of sharing a cheesecake recipe with you, he gives you the “recipe” for how he achieves those marketing results, and you head home to give it a whirl yourself.

The first time out of the gate, you don't see the exact same results he does.

In the email-marketing-not-cheesecake situation, what's likely to be the reaction?

“This email marketing stuff is such a scam.”

“Oh, he was SO exaggerating his results. There is no way he did as well as he said.”

“Those email marketers are all the same — no one's actually doing it, it's all just a big scheme to take everyone's money.”

(If you haven't said some version of those yourself, you've heard it from a friend, right?)

Instead of declaring failure, giving up, or assuming the whole thing is a global conspiracy, you went back to the recipe instead, and double checked…

(Of course, there are a slew of sub-questions under each of those bigger questions to check in the “recipe” too.)

The point is that all — or, at least, MOST — of the pieces need to be correct, accurate and in place in order for the recipe to work.

If they're not, it's not the recipe that failed.

It's not that the cheesecake is a scam.

It's that your ingredients, preparation and execution of the recipe need to be reviewed, troubleshooted and adjusted.

The mouth-watering results aren't false. In fact, they're still within reach. It's just a matter of making the right tweaks and adaptations to reach them.

Don't throw in the towel before you achieve your cheesecake. Go back to the recipe, figure out what might have gone awry, tweak, try again, observe the results, and adapt accordingly.

Delicious cheesecake is no scam. But it does take a little effort.

And no one makes it perfectly on their first try.

So get your apron on, and get back to that recipe… just because you haven't perfected your masterpiece cheesecake YET doesn't mean it's not just a few strategic, skillful adjustments away.

To your gourmet cheesecake & its many recipe iterations,