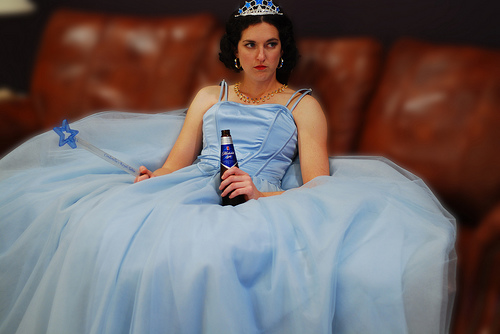 When Fairy Godmothers stop being flouncy & start getting real...

I used to believe that success in small business was all about the Bippity Boppity Boo. You know, the whimsical little chant that Cinderella's Fairy Godmother invokes as she magically changes Cinderella's rags into a beautiful frock, her rodent friends into mighty horses, faithful dog into a horseman, and a pumpkin into a carriage.

I believed that if I worked really hard and studied really hard and figured out the “right” things to do, there would come a day when–Bippity Boppity Boo!–my business would be flourishing, the money would be flowing, and I'd be breezing my way through a nonstop cycle of blazing productivity followed by serene and stressless rest or recreation.

There is no one magic moment.

What I'm learning is that things transform at different rates, and that midnight comes not just once, but many times over, transforming things back to their pre-magic states at seemingly arbitrary times.

It's as if just when Cinderella's pumpkin turned into the carriage of her dreams, her mighty stallions poofed back into mice. Or just as she's frolicking around in her new magic frock, her magic hairdo bopped back into a chambermaid's locks.

In my business, just as I start to see a major uptick in client work and inquiries, my creative well feels like it dries up, and the writing work grinds for a while. And then just when I get a bippity bop on the creativity juice, the client work drops off. And then just as the client work boppity boos back into a peak, something happens to make finances exceptionally tight.

It's never a complete magic transformation. There is no waving of a magic wand that brings everything to a pristine and perfect state all at the same time. It's tradeoffs. It's exchanging focus in one area for focus in another, exploding success in one aspect while struggling in some other facet. It's getting that pumpkin-to-carriage transformation shored up just in time to observe the frock-to-rags devolution, and realizing your horseman is about to become a dog just as you're preparing to launch toward the ball.

Fortunately, it's not about magic; it's about moxie.

I'm also realizing that there will never be a point in time when I will need a post-Fairy-Godmother perfect scenario to get to the damn ball. Sure, it'd be nice… but not necessary.

Suppose Cinderella had gotten halfway there, and her carriage re-pumpkined on her. How much of a badass would she have been if she'd picked that gourd up, kicked off the highly impractical glass slippers, and hauled ass to the castle? Shown up, charmed the hell out of the prince, written her number on the pumpkin & left that for the him rather than a smelly old shoe. That's moxie, baby. That's adaptability when stuff doesn't go as Fairy Godmother thought they would.

You can go a lot farther on hustle and guts and a naked willingness to show up even when you're barefooted and holding a pumpkin than you can on the breathless hope that if you just work (or wish) hard enough, you'll reach a bippity boppity boo point at which everything will be just right.

Me at age 6ish: Who needs a fairy godmother?

What I believe every Fairy Godmother knows, but we Cinderellas take a while to learn, is that midnight is far more devastating when it arrives for everything all at the same time than it is when it arrives in small chunks. Relatedly, perfection–or the peak that feels really close to it–is shockingly short-lived.

If everything in your business hits that SoCloseToPerfect point all at the same time (and it won't stay there for long), it all tends to hit midnight at exactly the same time too–leaving you defrocked and barefoot with a bunch of mice and an old pumpkin, not to mention a helluva long road back to anything resembling the success you so briefly realized.

But if things are peaking and “midnight-ing” all the time, at different intervals, you can handle that. You might wind up barefoot in the carriage, or you might wind up with only one horse and a very confused saddled mouse, but the rest of your entourage and ensemble is still working. Still moving forward. Still getting you where you want to go while you work on finding a solution to the barefoot or perplexedly saddled rodent.

You deflate the threat of midnight when you learn to juggle the changes.

Not that the juggling is easy, mind you… but if you can learn to handle the constant ebbs and flows in the different areas of business, you start relying a lot less on the perfection of any one facet–and you free yourself from the fear of losing it all the minute any one of them drops.

This is all much easier to remember at the times you least need it.

I consistently find myself believing this and trusting it far more intensely when I'm feeling more “Cinderella at the ball” than the times when I'm feeling “Cinderella at 12:01am.” I think that's human nature. It's easier to believe that stuff is cyclical and that moxie counts and that grit ‘n guts beats a magic wand any day… when you don't need it.

But it's when the moxie's called for and the grit ‘n guts are your only means to making it (barefooted and pumpkin in hand!) to that damn ball, that we're most likely to give up and wish for a bippity boppity boo.

That's part of why it's good to have a community of other Cinderellas you can Tweet to when the going gets tough–someone to remind you that what you lack in glass slipper you make up for in frock, and that even if your horseman is a mouse, your hair never looked better.

To my fellow Cinderellas, here's to bucking the magic and shaking our moxie-makers.

(Just remember to (gently) remind me I said that the next time you see me running barefoot to the castle with a pumpkin under my arm, okay?)

Fairy tales not required: What lesson are you learning?

What lesson are you currently learning or have you recently realized? (Metaphors to children's tales completely optional.) What recurring theme do you find you need to be reminded of from time to time? And what bit of “magic” have you recently called bullshit on–and been better for it?