Nitpicking: Why We Do It & 2 Questions To Stop Doing It 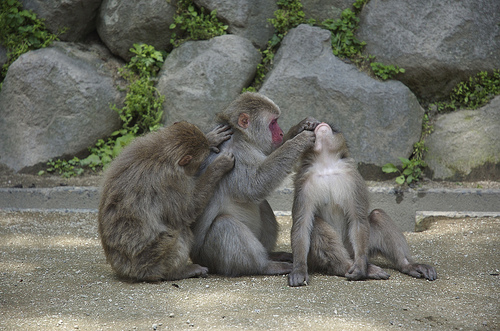 Nitpicking: it's not nearly as cute when we humans do it.

After you've handed off a task or project to a team member, there will come a point in time when you see the results of that person's work. You may be pleased. You may be disappointed. Or you may be nitpicky.

If you catch yourself being nitpicky with someone else's work (or perhaps even your own), ask yourself: Does it matter? and Was it doable? If the answer to either of those questions is “No,” you'll know it's time to stop picking for nits and start figuring out a better solution.

Nitpick Buster #1: Does this matter?

If your team member creates a sales page and misspells the name of your new product, that matters. If she creates a sales page and uses a different shade of red for border around an image than you would've used, that probably doesn't matter too much. If your assistant buys a new headset for you that's incompatible with the phone you use, that matters. If he buys the headset from Headsets R Us instead of Headsets We R, where both stores sell the headset for the same amount, that probably doesn't matter.

Determine whether what you're seeing as an issue really is—it might simply be you noticing that your team member does things differently than you do, which is bound to happen, because you're different people.

If what she's doing is negatively impacting you or your business, then it needs your attention and needs to be handled. But if your team member is getting the job done well and effectively, but is just doing so differently than you would do it, then the difference probably doesn't matter.

Rule of thumb: Don't worry about the stuff that doesn't truly matter.

If you're worrying about the stuff that doesn't truly matter, you might be delegating the wrong tasks to your teammate–tasks that you care too deeply about and would thus be better served by doing them yourself. If the color aesthetic on your blog (including the borders around images) keeps you up at night, then don't delegate things like color choices to someone else–give your team member a few hex codes of colors you approve of at the start of the project and save yourself the nitpicking headache later.

Don't hand off tasks that make you crazy when you don't do them yourself. We all have some things that must be done a certain way, no matter how little it matters in the big picture, and moving beyond those compulsions is a topic for another post (or blog) entirely! But when it comes to delegating and working effectively as a team, all you need to remember is this: do not delegate the stuff that brings out your inner obsessive-compulsive personality.

We tend to nitpick more when we're not feeling fulfilled by whatever we're doing, so if you find yourself gettin' nitpicky about what your team member is doing, you may not be giving yourself enough to do that you really care about. If you're handing off the tasks that you're passionate about, take them back. If you allow yourself to be passionately consumed by the projects on your own to-do list, you'll find yourself more likely to focus just on whether your team member's work is done, done well, and done effectively–and less apt to pick at it.

Nitpick Buster #2: Was it doable?

A boss once asked me to acquire an electronic gadget in a specific shade of blue. The problem was that the gadgets were only sold in black or white. So even though the color of the gadget mattered to my boss, what he was asking of me wasn't doable.

When I let him know the gadget didn't come in blue, he started nitpicking how I ascertained that information: had I asked multiple sales reps, did I think to check at several other stores, how did the sales reps know it only came in black and white and not blue, etc.

Unsatisfied with the reality that his desired outcome wasn't possible, he got nitpicky, spending a lot of extra time and energy on a task that wasn't doable in the first place.

Rule of thumb: Nitpicking the undoable task gives only the illusion of control.

Nitpicking at an ultimately un-doable task is illogical, but is also very common. We resort to nitpicking in the face of undoable tasks or unachievable outcomes because it gives us a sense of control, as if we're going to make the undoable task doable again if we just pick and prod at the right spots.

When we get into the nitpicking cycle, though, we tend to get blinders around the place where we really do have control: adaptation. If we stop picking at the dead-end task and start refocusing on other means of achieving our ultimate goal, chances are we can get back on track in short order. For my boss in the example above, once I reminded him that we could always order a blue skin for the gadget he wanted, thus giving him a music-playing gadget with a blue exterior (his original ultimate goal), he was happy. But he'd forgotten all about that option in his haste to regain control over the task by picking apart the dead end in front of him.

Rule of thumb: There are usually 3 options for responding to an undoable task: Move On, Adapt, or Nitpick.

For example, suppose you ask your teammate to integrate PayPal with your choice of autoresponder services. your teammate reports back to you that the integration isn't doable. You have three choices:

(a) Move on. You believe your teammate, and let her know to scratch that undoable task off the to-do list.

(b) Adapt. You believe your teammate, and ask her to investigate alternate ways of accomplishing the same thing with other autoresponder services.

(c) Nitpick. You question your teammate's information, or you doubt that she knows enough to be making that assessment.

If you choose option “c” only on occasion when you have reason to believe your teammate might have missed something or gone off track, that's different–that's not nitpicking, it's double-checking & it's helpful.

But if you routinely find yourself at option “c” and you frequently distrust or doubt the responses your teammate gives you for the tasks she's doing, something's wrong. You might be asking your teammate to do the wrong kinds of tasks–ones she's not well suited for or that require an expertise she doesn't have. Or you might be hiring the wrong kind of team member for the tasks you want done. Either way, consistently finding yourself stuck at option “c” is a pretty good indicator that you need to make some changes to how you delegate, what you delegate, or to your team itself in order to make any real progress on your (or your team's) to-do lists.

What nits do you pick?

When do you find yourself getting overly nitpicky about things? How do you make yourself aware that it's happening, and how do you stop it?