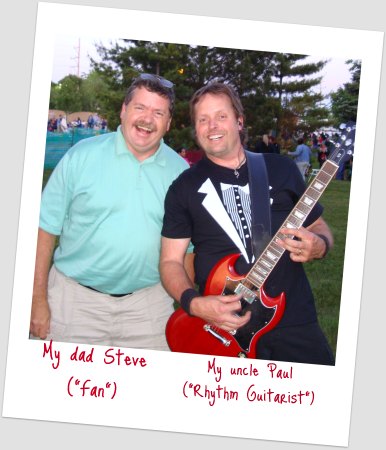 The band is often booked to play at bars and nightclubs, though they also have several bookings for weddings and parties too. I got to see them play for the first time at an outdoor festival, the Lake Villa Celebration of Summer, this past weekend.

And I realized, as I watched them play and watched the audience dancing and clapping and enjoying themselves, that there were some pretty powerful lessons being taught at that concert that were applicable to online businesses in general.

Don't hold back the good stuff

The band kicked off their performance with high-energy, highly-recognizable songs that bridged the many age ranges at the festival. They didn't build up to the highlight songs or bookend them with slower or less recognizable tunes. It was immediate high-energy that lasted the entire performance. They grabbed the audience's attention by starting with the good stuff, and they made sure there was no time to lose interest or get bored by continuing to deliver audience-pleasing tunes. 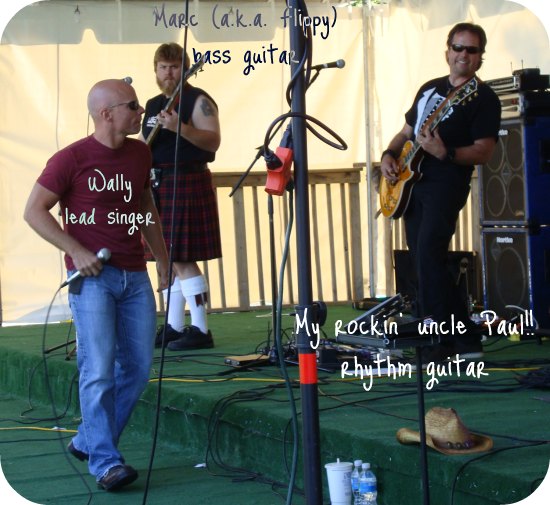 Take away: Don't “warm up” on your blog or in your teleclass. Lead off with heavy-hitting material. Make your first point or headline be one that people will remember at the end of the session or blog post. Don't save the “good stuff” for later–and don't vamp. The audience knows vamping when they see or hear it, and it comes off as stalling. Just jump into your first big hit, and use the momentum from that to carry you into your second, and your third, and your fourth…

If you've got an unexpected influx of new audience members, either red-velvet-rope them off, or adapt & welcome them in.

Liberty's Teeth often plays at bars, nightclubs, and parties where the front row is populated by adults dancing to the songs.

But the Celebration of Summer festival provided a different front-row population: young kids. A lot of young kids.

But instead, the lead singer started inviting the enthusiastic kids on stage to dance alongside him. He held the mic down to them so they could belt out a chorus with him. And they loved it. 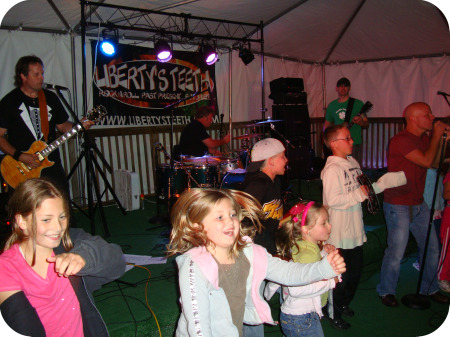 And more than that, their parents and their grandparents loved it. Parents and grandparents that maybe weren't huge fans of the exact songs being played at that moment were suddenly huge fans of the band, because the band was engaging their kids and grandkids and making them the co-stars of the performance. Suddenly, moms were up front taking pictures. Grandpas were clapping along.

The band still could've had a great show if they'd red-velvet-roped the kids and played to the adults. But because they chose to adapt to their new audience and integrate them into the show, they wound up reaching people that might not have been intrigued by the performance alone (or who couldn't have been intrigued by the performance alone because they would've had to have been chasing after their kids rather than watching them perform with the band).

Liberty's Teeth got a whole new set of fans — of all ages — due to their ability to quickly adapt to their audience. 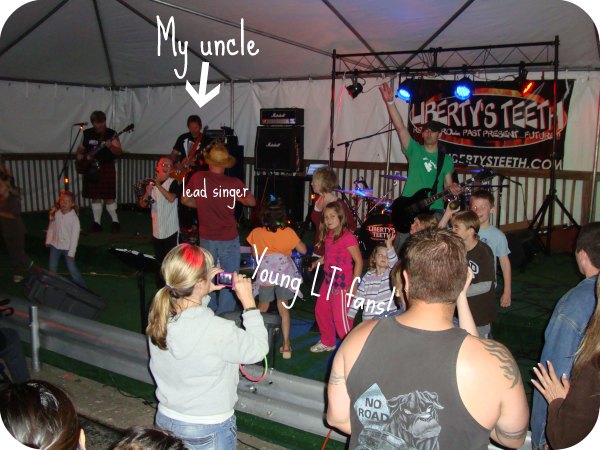 Liberty's Teeth with their young fans

Take away: Know your core audience. But also know that there will be times when adapting to a new audience, or a wider audience, will not only expand the reach of your message but might also further engage your core audience in a new and memorable way. Don't be afraid of expanding your own velvet rope once in a while.

Give the people what they want, even if it seems routine to you

Sweet Child O' Mine. Born to Be Wild. All Right Now. Somebody Told Me. Mustang Sally.

You know that the band has played every single one of those songs about a hundred times before. Some of those tunes probably sound pretty routine to them by now.

Take away: Deliver the goods the audience wants, even if they aren't the goods that seem novel and wowing to you. You can always work in a novel idea or random tangential musing, just like the band can always work in an original song here and there. Your audience will continue jamming along with you into unknown territory if you provide them with the stuff the expect and clamor for along the way.

Get in the audience and watch your own show.

All three guitarists in Liberty's Teeth have wireless transmitters for their electric guitars, which allow them to hop off the stage and mosey into the audience. Which they do. And which is really, really awesome. One minute, you're singing your heart out to Mustang Sally (while standing next to your mums whose name actually is Sally), and the next minute the guitarist from the band is playing the song right next to you. 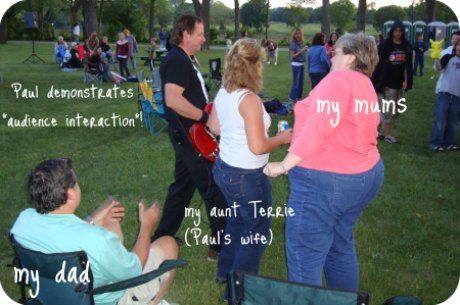 The band members are the stars when they're on the stage, but when they're in the audience, they're almost hard to spot–no spotlights, no wires, just them in the midst of a crowd of people.

But the ironic part is that's when they're the most visible, because people love having them mingle with them while they're playing (if for no other reason than marveling at how they can keep right on playing a tune while carrying on a conversation with an audience member). The teens loved dancing with the lead guitarist while he played. My dad got a huge kick out of having his picture taken with his brother while Paul played on.

The audience was so intently focused on the musicians while they mingled in the crowd that even without the stage lights and elevation, they were noticed and appreciated very tangibly.

Take away: Surf your own website sometimes. See what it is your audience is seeing, from their perspective. Is your message coming through as clearly as you want it to? Do you need to make some sound adjustments? And hang out with your audience where they are: in your comments, on other blogs, on Twitter, or in person. Notice how much more visible you become when you hop off the stage and mingle in the audience!

Thank you for a GREAT show. I can't wait to rock with you again soon!
Check out the Liberty's Teeth website