Forward From The Precipice of Completion 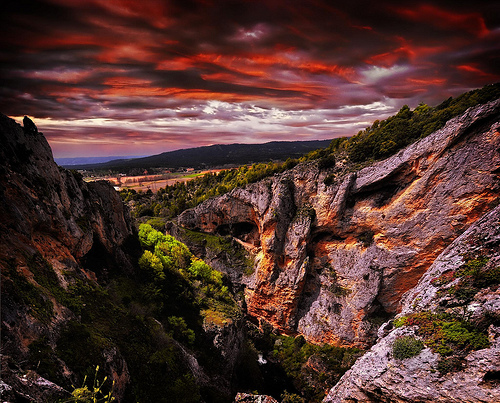 The Precipice is always beautiful & frightening, simultaneously, and equally.

The Rush of the Start

Getting started on something is easy in a lot of ways. There's the excitement of a novel undertaking, the rush of charging headlong into a new foray. There's a lot to learn (my favorite part), a lot to explore for the first time, so much to figure out.

There's something safe about the Start. You don't have to have anything really figured out at the Start. It's new and exploration is celebrated.

Plus, when you're just starting out, there's such a vast array of possibility all sprawled out in front of you. The outcome is a conception, an idea, but the reality of what comes next is amorphous and moldable with each new step. We feel the high of breathing deeply all that Could Be, and exhaling all we might create.

The Safety of the Doing

There is safety in the Doing. There is inspiration in the process and the hands-on creation. A rhythm develops in how you relate to the project–when you knead it and when you let it rest. When you dive into it and when you float around in it, letting the next steps wash over you. The Doing is when you get to be in the heralded “Zone.” When you get to get lost in the developing project and its potential.

Down the middle of the path, during the incubation of the project, it's still yours. It's yours to nurture, tweak, trim, fill, mold, weld, do with. It's under your purview and your domain.

Fear of the Finish

Finishing something is scary in a lot of ways. Completion signals an end to the tinkering, the building, the exploring. That which was novel and ripe for exploration is routine and known. The vast array of possibility has been whittled down to a few possible outcomes.

Plus, and perhaps even scarier, completion brings an end to the control you have over the project. When you finish it, turn it in, release it, publish it–you let someone else see it, have it, use it, read it, form opinions about it. And that's terrifying.

The Sacrifice of Completion

Completion is a sacrifice. A sacrifice of your rhythm and your control and your sole dominion. It is a release into the great ether, and an act of faith that the elements the Completed It encounters won't harm or mar it too much.

Finishing and sending a Completed It into the world leaves It vulnerable to others viewing it. Noodling on it. Crafting a discourse around it that may or may not accord with all you hoped for it when you were at the Start.

Completion is an accomplishment and a loss. It is a goal and a fear. It triggers all of your feelings and experiences of Letting Go. Is there relief? Perhaps. Pride? Often. Celebration of what's been done to reach completion? Sometimes.

But none of that negates or stays the discomfort of the Finish. The rush of the Start, the hope of the Could Be, the incubated safety of the Doing, are each exchanged for Completion. For reaching Done.

And Done can be a harrowing, uncertain place. A precipice. A fragile and eroding edge near a deep and jagged chasm.

Forward from the Precipice

Isn't it odd, though, that it is when our Completed It is released to the foggy unknown and our toes shuffle a few loose rocks off the ledge of Done, that we're most likely to notice a path we hadn't seen before. Maybe a bridge that appears to cross the chasm (though we can't be sure). Perhaps a steep but traversable staircase into the chasm. Sometimes a road heading in a direction we never considered, that we would have sworn wasn't there yesterday.

And in that moment, as we take our first tentative steps toward this recently revealed path, just as our muse mourns the Completed It that is no longer in our nest, we find ourselves starting off again.

In a new direction.

With a new curiosity.

The excitement of a novel undertaking, and the vast array of what Could Be stretched out before us.

The rush of all that is fecund and possible is salve to the tender fear and loss of what is finished, and suddenly, we find ourselves in the Start once more.