A Tribute To Twenty

On November 10, 1985, my father and my uncle Phil were hit head-on by a drunk driver while out doing some Christmas shopping. Both Dad and Phil were badly injured. When the paramedics arrived, my usually convivial father was combative and swearing like a sailor. Even though all four of his limbs were broken (pulverized in parts), he kept fighting the medics, insisting that he would not let them amputate his legs (the car was so badly crushed that the steering wheel and dashboard were basically smooshed down onto Dad, and the medics were going to amputate his legs to remove Dad from the wreckage and attempt to save his life). The medics, in the midst of Dad's persistent fighting and swearing, finally managed to extract him without amputating his legs.

I was at home when the phone call came, and I remember very little about it. What I do remember are odd bits and clips of the moments… I remember seeing the hand of either my mother or my aunt Mary (Phil's wife) holding a phone, and the hand was trembling. I remember Mom rushing around the house getting a diaper bag put together for Alex, my then-one-year-old brother. I remember Mary or Mom telling me, as gently as possible, that Daddy and Philly had been in an accident and we had to go to the hospital.

I remember clutching my favorite Cabbage Patch doll as I stood on the sidewalk outside of my house, staring at the van we would drive in to the hospital, and waiting for Mom and Mary to come outside… I remember three boys, on bicycles, ride by… I guess I was already crying at that point, because the three boys started mocking and ridiculing me for crying.

Then I remember being in the van, staring out the window, with Mom driving and kind of shaking, and Mary asking Mom if she wanted her to drive… I remember passing what appeared to be the scene of an auto accident, and Mom exclaiming, “Oh God… what if that's from them?!” [I have no idea whether that was their accident site or not.]

I remember very little from the hospital, just really bright lights… a waiting room that, in my very, very blurry memory, seemed like it had gold lights or a gold-framed painting… I just remember gold in the waiting room. After that? I remember nothing. Nothing at all.

The next memory I have is getting to visit Dad while he was still in the Intensive Care Unit of the hospital. I wasn't supposed to be allowed to go there; the doctors made a special exception so I could see my Daddy. My Daddy, who wasn't supposed to have survived his first night after the accident.

I remember walking up to his hospital bed; Mom was already sitting beside him. A big tear rolled down Dad's right cheek, and he mouthed the words, “I love you” to me. He couldn't speak due to a tracheotomy. I don't remember anything else about that visit; just seeing him say, “I love you.”

Dad came home from the hospital on December 24, 1985. The ambulance turned its lights and sirens on when it got near my house so that I'd hear them coming and know Dad was home. That was the best Christmas gift I've ever received.

Dad's face was crushed in the accident, and as a result, his jaw was wired (well, his entire face was being kind of held together by a metal halo, a technology pioneered by the doctors for him and still used today) and Dad had to “enjoy” Christmas dinner blended up and drank through a straw. He had to stay in the hospital bed and be cared for… and I don't even know how long that lasted. I remember so very little about that time in my life. I think I blocked most of it out.

Dad was never supposed to walk again. But he did. He was never supposed to fly again… but he did. He was never supposed to live through that accident… but he did, and now, twenty years later, I look back with wonder at the two decades of life with my father that I've gotten to enjoy against all odds and against all medical predictions. I have suffered no greater tragedy in my life to date, but I have also witnessed no greater strength, courage, and fortitude than that displayed by my mother and father as they struggled together through Dad's recovery. And, as the years passed and Dad's injuries continued to present hurdles, I continue to see that strength and courage in each of them. When I had to write those “Who Is Your Hero?” assignments in school, my answer was always crystal clear; it was always my parents. Still is.

In honor of these twenty years, in honor of two decades that I got, that Dad refers to as his “bonus years,” I present to you, a brief Photographic Tribute To My Daddio. 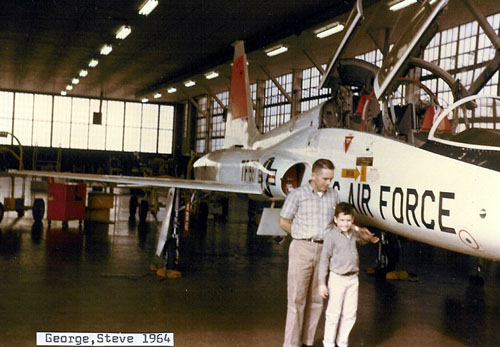 Dad always dreamed of flying. His father, George, was a pilot as well. Here they are, father and son, standing near a plane in 1964, when Dad was only six years old. 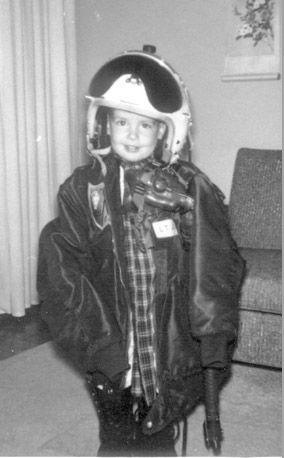 Dad tries on his father's flight gear. Don't worry, he'll grow into it. 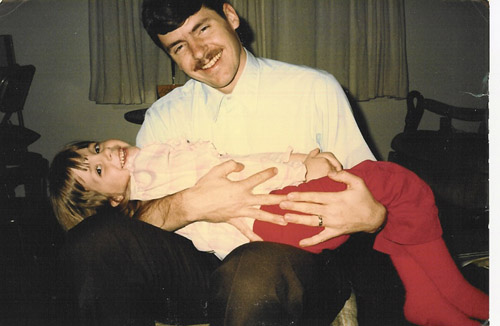 This is how I remember "Daddy" from my childhood: handsome and strong, and I was his little princess. 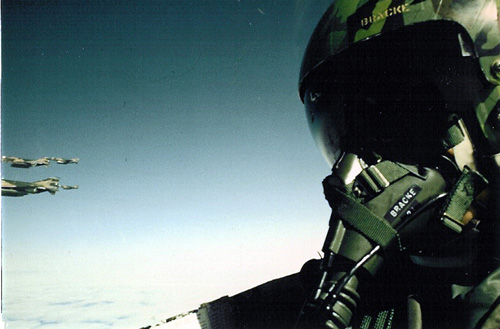 When I was very young, I believed that every plane that flew overhead was my Dad, and so I waved to every plane I saw, and I was sure Dad could always see me and was waving back. (He says that, indeed, when he would fly over our house or my school, he would wave down to me. Just in case I was there, waving at him.) 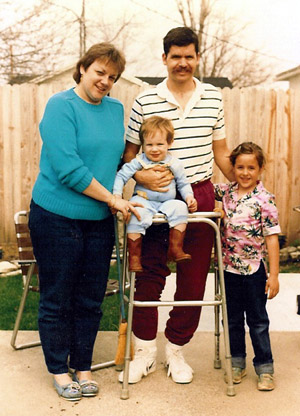 Several Months Post-Accident: Sure, we weren't fashionable... but hey, we were all together, and Dad could even stand up! 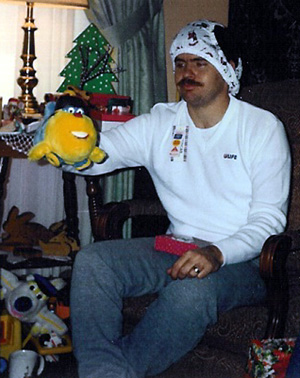 Dad suffered severe head injuries in the accident. Did they have long-term effects? Well... you decide. 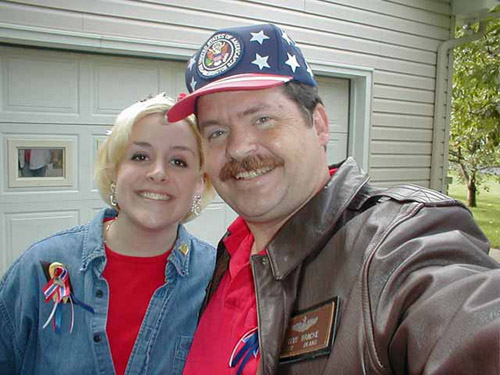 Twenty years of hugs and smiles that I was so afraid I'd never get. I'm so grateful that I did. 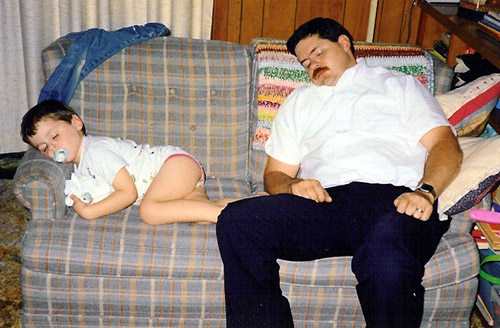 In 1985, when the accident occurred, our family wasn't yet complete. Thanks to those "bonus years," a fifth member of the family joined us in 1988: Chaz "The Bug" Bracke, shown here, napping with Dad. 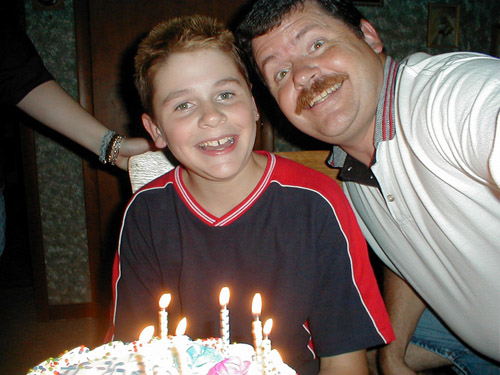 ...and shown here, mugging it up for the camera with Dad. 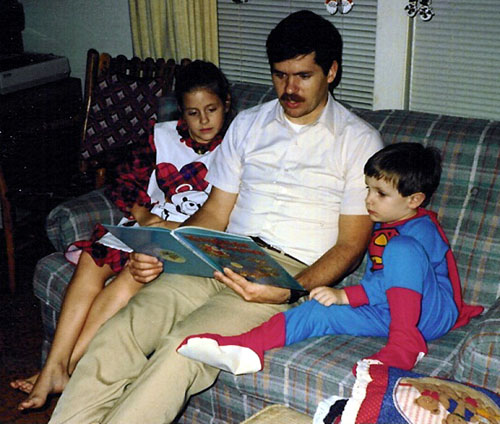 We've gotten twenty extra years of Twas The Night Before Christmas readings every year on the evening when Dad came home from the hospital, 12/24. 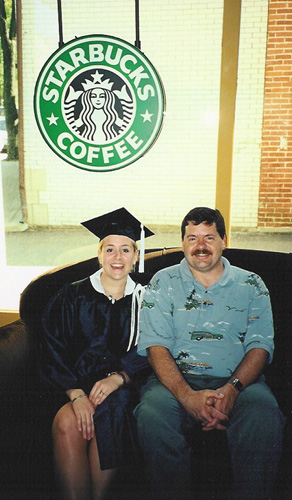 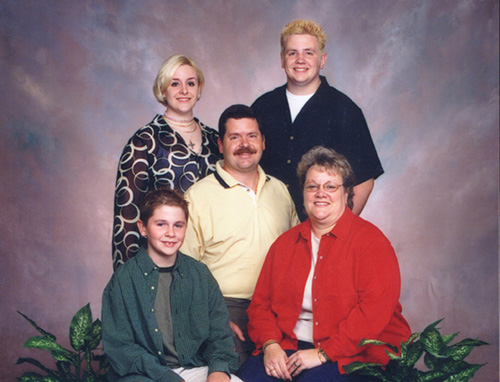 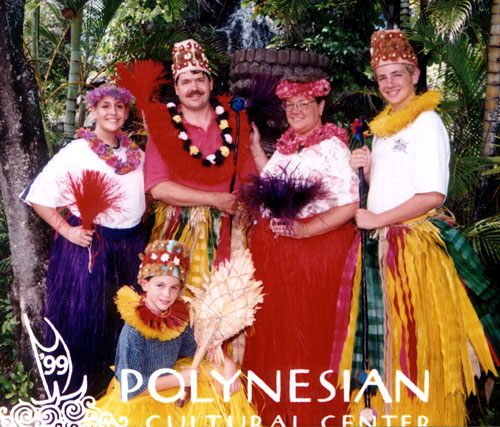 We've gotten twenty extra years of family vacations and all the stories and laughs that come with those... here we are, dressed as natives to the Hawaiian islands. 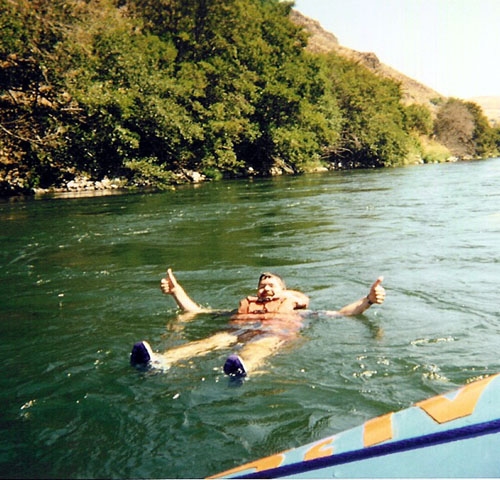 To this day, nothing has ever taken away Dad's thumbs-up, can-do attitude.