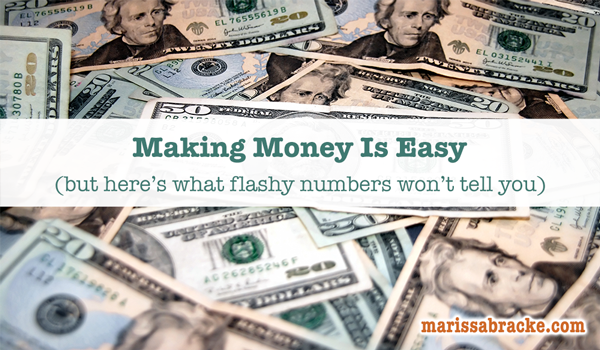 “Making money” is hyped as some special skill.

Absolutely anyone can make money.

Or the woman who spends $25,000 on ads and sponsorships and paid networking connection lunches, and lands a $2,000 client. She made money.

They're illustrating a rule of thumb:

Making money is incredibly easy… if you're willing to lose a lot of money doing it.

Many of the businesses out there touting big, flashy numbers are doing exactly that: losing a lot of money all in the name of making money.

It's not that they aren't actually making the money they're claiming. They are. It's just that there's a difference between “making money” and “being profitable,” and you'll notice you hear many more business touting the former than you do the latter.

The real skill and savvy is knowing how to make money in a way that lets you keep most of what you make. That's key when building a sustainably successful business.

But many coaching programs and courses emphasize the “flash” of big numbers without much (if any) focus on profitability, let alone long-term sustainability.

And that's why you're seeing a proliferation of business that seem to come out of nowhere, do big flashy five-figure or six-figure launches, and then just sort of fade away, all within a very short period of time. We get to hear about the flashy launch, but we don't get to hear about the overall profitability of the business. Then the business vanishes and everyone sort of forgets about it and moves on.

They were flashy. They just weren't profitable. And you can't be sustainable without being profitable.

Here's your second rule of thumb for today, and if you take nothing else away from this article, let it be this:

Numbers — no matter how big or flashy they are — mean NOTHING without context.

Let's say Business OhNo runs a launch that brings in $100,000. A six-figure launch! Woo-hoo! And after all expenses are tallied, Business OhNo winds up negative $10,000. That means, in context, Business OhNo's Profit Margin is -10%, and she lost $0.10 for every dollar she brought in. Not so good, Business OhNo!

But here's the rub: all three businesses are going to advertise that they had six-figure launches. And they will all be telling the truth.

Business SoSo isn't going to tell you, “I only managed to keep 15% of the money I made… I'm pretty good at selling, but I have a LOT to learn about getting to a sustainable level of profitability.”

And Business OhNo isn't going to tell you that she wound up in the hole after her six-figure launch.

All they'll give you are the numbers. They won't give you the context. And the context, as you can see, makes a big difference.

Which brings us back to: Numbers mean nothing until you see them in context…

Which is especially important to remember when someone's selling you on their ability to teach you how to make money, because making money's easy if you're willing to lose a lot of money to do so.

In other words, and here's Rule of Thumb #3 for today:

It isn't making money that takes savvy, it's being profitable. Which is why not everyone who makes money is profitable.

And that's why context matters so darn much.

Anyone can make a flashy load of money. But not just anyone can do it profitably.

Anyone can spend their way into making an impressive amount of cash — but not just anyone can build a profitable, sustainable business.

When you're out there looking for coaches, courses, consultants and information, it's easy to be taken in by the big, flashy numbers. But all those numbers tell you is that the person made money.

If, on the other hand, you want to know how to be profitable, how to be sustainable, how to make money and keep it, that's a different ballgame.

And for that, you'll have to look for other markers of credibility, knowledge, trustworthiness, business know-how, and overall wisdom. If there also happen to be flashy numbers, great. (Flashy numbers certainly don't disqualify someone — they just aren't, by themselves, sufficient to qualify someone as She Who Knows About Profitable Success.)

It's all about context.

Rules of Thumb for Easy Review, Jotting Down or Tattooing

1. Making money is incredibly easy… if you're willing to lose a lot of money doing it.

2. Numbers mean NOTHING without context.

3. It isn't making money that takes savvy, it's being profitable.

4. Not everyone who makes money is profitable.